UK.plc on the brink of something wonderful?

Being myself a product of the British Educational System, and having followed a fairly conventional path in to my current career, I have long felt a substantial frustration with the direction of our current higher educational system.

I am of course talking primarily about the prevalence of “Hairdressing”, “Media Studies”, “Photography”, and “Tying your Shoelaces” courses which seem to be so popular with the modern youth.  Coupled with this has been a somewhat backwards attitude towards Computing and IT qualifications, or “ICT”.  Thinking back to when I graduated some 15 plus years ago now, some of the available  courses were somewhat out-of-touch with the marketplace, teaching obsolete programming languages (COBOL) and disciplines such as JSP which the real world had left behind.  For the first two years after graduation, I sept unlearning, or more specifically relearning what I actually needed to have a real career in Computing and IT, but to be fair, despite teaching  obsolete topics, the courses had equipped me with the basic approach and knowledge I needed to apply to any language or discipline that I required.  Indeed it would be foolish to assume that I would be programming in COBOL or PASCAL for the remainder of my programming days, knowing how the market was going to evolve in unknown directions.

The Technology sector is the industry in which I work, so I have a huge vested interest in caring about the direction it takes.  For me it is the future, it is replacing many of the White collar types of work our Parents could or would have done in their lifetimes, and it has the potential to become  the new  wealth creating sector of the economy, since it’s evident we just cannot compete in Manufacturing, and have exhausted most of our Raw Materials already.   In my estimation this makes it so vitally important for our economy, even for those that have no interest in working within that sector.

For me then, the Educational System has let the Technology sector down badly for the last ten years or more.   Many people don’t seem to have much of a clue about the difference between Computing and IT, or “Information Technology” to give it it’s full title.   For me, IT is about using the modern tools available to do a job.  It’s not specifically about that £500 PC or £1000 laptop sitting in front of you, but it’s you being able to use that piece of equipment to help you complete a task of some sort;  in the same way Screwdrivers, Paintbrushes, Spanners, and Shorthand might have been to support other professions.

If we are honest, in recent years this has translated in to needing to be able to use a Mouse and Keyboard, to navigate Windows, MS Office, and yes, even to know how to use popular Office suites such as MS Office, or perhaps using a Tablet or Smartphone.   It is absolutely vital that this particular facet remains current and aligned to market trends.   The downside of this in the last 5 years or so has meant knowing the Microsoft Product suite, Excel, Powerpoint, Access, and Word specifically.   Of course in order to do all of that, you don’t need to understand much about how a computer works, or why it does what it does;  No knowledge is needed of Binary, of Electronics, although a high level knowledge of Computer components would probably be useful.   All of these skills will be handy for just about any student of any discipline these days.  In much the same way as English and Maths are part of a standard curriculum, so I believe Information Technology should also be included as standard, and probably in the first 2-3 years of Secondary Education (I believe they call it Years 7-9 these days!).    I know “Graduates” of a Higher level Computer Programming course that think programming is using Visual Basic for Applications within Access or Excel, when in my estimation this is “just” a tool (and admittedly a fairly sophisticated skill to possess) to do a job which ought to be a product of the Information Techology arena.

Contrast this with a Computing course, or more correctly titled a course in Computer Architecture or Computer Programming, which clearly would require a much lower level of detail around how computers work, and why they do what they do;  Perhaps a missing element in Networking could be folded in to the Architecture section?   In any case, out of this fundamental knowledge of Computer Architecture grows a necessary understanding of Operating System concepts, which in turn grows in to API’s and programming languages that may or may not be platform specific.

I have recruited and interviewed staff several times during my career to date, and each time I’ve found it necessary to explore just what content the Computing courses a candidate has on his CV actually contained, and from that establish whether the basic level of required knowledge is there.  In the Networks space, it’s quite astounding to see how few people in IT actually have a grasp of how the Internet works, and how applications could be exploited over the Network if not written properly.

So, enough moaning, Why are we on the brink of something wonderful?

The Raspberry Pi is a fantastic concept which has been long missing in the marketplace.  It is a simple, and cheap (not just cost effective) solution for providing Computing Power and technology.   It literally costs about $30 to produce, and the Raspberry Pi Foundation does not aim to turn a profit, so this is loosely the price to you as an end user.  In exchange you don’t get a finished product nicely cased with lots of glossy instruction manuals;  Instead you get a completed PCB slightly larger than a credit card, but probably smaller than the smartphone in your pocket, with a Media Card Reader slot, a couple of USB ports and a Network interface, and an HDMI Out so you can plug it in to a modern TV to use, and not much else!    No PSU, no Keyboard/Mouse, and no Operating System is provided;  instead you have to use another PC to write the Open Source OS on to a Media Card, and then plugging a USB keyboard & mouse in and away you go! 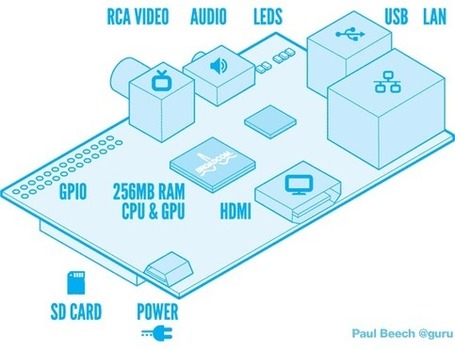 Currently most of the available OS’es are Linux based, but I expect this will change over time.  The Pi uses an ARM processor based on a Broadcom System-on-a-Chip, and has a limiting 256Mb of RAM, but again this costs $30  (or ~ £30 for us Brits).

What an amazing Catalyst for learning the Pi could be!  Providing cheap, accessible, programmable computers everywhere!  It’s aimed at the Educational sector, and it fits in so well with my vision of a Computing course it’s astounding.  It could be used to learn Web programming!  Several of the currently available OS distros can support a LAMP (Linux, Apache, Mysql, & PHP) stack, and of course it facilitates a clear understanding of the system architecture and indeed it’s limitations play to this as well, having to write code that performs well and within the capabilities of the Smart Card based Storage and 256Mb of RAM.

Other options are of course there too, with C and Pascal compilers, Basic compilers/interpreters, and so many possibilities it’s incredible.  The Pi doesn’t lack for processing power either, it’s capable of outputting an HD picture to a TV and decoding video at 720P resolution on your HDTV, or even playing Quake.

So, if you are a parent with a curious youngster, I strongly suggest you think about investing in one!  It’s not going to replace your family PC, at least not yet, but what better way for both you and your children to learn together about Computers?  And it doesn’t stop there either;  Schools adopting the Pi in to the curriculum could develop Craft Design Technology (or whatever they call it these days!) sessions around making cases for the Pi, and so much more!

The second reason dovetails neatly in to the Slice of Pi.  If Pi helps shape the Computing aspect of Technology Educational needs, then the Governments’ brave decision to effectively scrap the current ICT curriculum in January this year, and to invite dialogue with the Technology Industry on developing a replacement has kindly facilitated the other missing part of my vision.

The so called “Microsoft GCSE” has the potential to deliver Students with real skills in modern technology solutions out to the workforce in a few years time.  If at 16 or 18 a student had the ability to write applications for a modern Windows PC using Visual Studio, or to interface with and control a SmartPhone, or even produce Apps for that SmartPhone, then the system has done it’s job, and will be producing worthy candidates once more.

I know that other vendor entities including Cisco have been engaged in discussion over the future curriculum too, (see here), perversely the Government has even been criticised for perhaps listening too closely to the vendors, but at the end of the day it’s Vendors like Cisco, Microsoft, and the Raspberry Pi Foundation that are going to be leading the market in all sorts of directions over the next 5-10 years, so why should we not pay close heed to their needs?

If all of this happens as I sincerely hope it will, UK.plc has the potential in years to come to retake the worldwide lead in the Technology market, and to turn out some of the most supremely and more importantly usefully qualified students which will go on to lead our economy who knows where!  This is something which we’ve been fighting to do for years now in the face of strong competition from Asia and the Pacific.

This is all my own opinion and perspective, and of course it’s possible I’ve got it all wrong, and my Vision is naught but ideas in my head.  I sincerely hope not, but all the same it makes me feel like we’re on the brink of a whole new journey now, so let’s make the most of it together, and see where it takes us!

(I am currently in a waiting list to get my own Raspberry Pi).